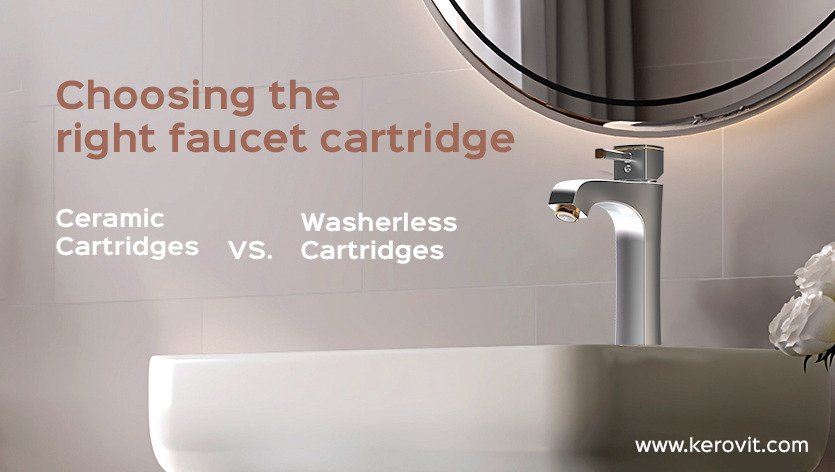 Since the advent of the technological revolution, there has been constant development and enhancement in almost all spheres of functionality, regardless of the type of industry. Naturally, the bathroom space was also subject to its own share of technological advancements over the years. If we narrow down on it, we see that the internal constructional parts of faucets have surely been in the limelight in this context.

An important part of the standard faucet is a cartridge. In common faucets, cartridges are responsible for controlling the flow of water in a vertical motion (up & down), and the water temperature is controlled in a horizontal motion (left & right). But before we dive in further, let’s talk about why the need for ceramic and washerless cartridges came into existence.

A rather ineffective past – Compression Cartridges

Back in the day, compression cartridges were used in standard faucets wherein a shaft would help compress the rubber washer in a corkscrew style. This would be done against a seat, which was in the form of a circular bushing. Once ample pressure was applied to the seat, a seal would be created. In this case, when a user would turn on the faucet, water flow began as the internal shaft raised and the seal released pressure. The major downside to this apparatus is that it would unfortunately allow a lot of dripping, which would eventually lead to deterioration of the seat and washer.

Since the seat and the washer would require to be replaced in frequent time intervals, it was time to make a change. Let’s see what happened next!

A much needed upgrade – Washerless Cartridges

When the washerless cartridge was created, it received praise from everyone due to its superiority over the earlier mentioned compression cartridges, especially in terms of the durability factor. The most prominent highlight of a washerless cartridge is a neoprene stopper; its purpose is to maintain a continuous pressure against a steel plate. A spring also helps the stopper in maintaining this pressure. The plate has an opening which is in the shape of a crescent, so when the cartridge is turned, it simultaneously gets aligned with the neoprene seal’s opening, ultimately resulting in the desired flow of water. Upon turning off the faucet, the solid part of the steel plate blocks the opening of the seal, which is followed by the water flow getting blocked as well.

Even though washerless cartridges are more durable than compression cartridges, it is unfortunately a fact that even these types of cartridges are subject to wear and tear in the long run. After repeated use, you may find that the spring has weakened and that the neoprene seal breaks down, which then leads to a leakage from the faucet. However, it must be noted that the spring and seal of a washerless cartridge are easy to get and are quite cheaply priced, so the repairing process is rather hassle-free!

The most recent types of faucet cartridges are Ceramic Cartridges. Innovated in Germany, ceramic cartridges were truly built to last. Friction and frequent usage tend to be completely ineffective against ceramic carbide, which makes ceramic cartridges the most durable faucet cartridges of the modern era. In order to minimise the stress of regular maintenance and the risk of faucet leakage, ceramic cartridges don’t make use of components such as washers, springs or even any rubber parts. This type of mechanism has two ceramic carbide discs that have two triangular cutouts, in opposite directions. These discs are held together by a self-contained cartridge. Whenever a faucet with a ceramic cartridge is turned on, both the openings (top and bottom) get instantly aligned and allow the water to flow. On the contrary, when the valve is shut off, the alignment of the openings gets disrupted and these openings get blocked by the solid part of the cartridge, leading to a stoppage in the water flow from the faucet.

However, even ceramic cartridges haven’t reached the level of perfection humans desire! If any form of debris enters and gets stuck in one of the openings, ceramic carbide’s brittle composition can be a problem. This can lead to an issue with the closing of the valve and eventually in the flow of water becoming incessant. On the bright side, the replacement process of ceramic cartridges is pretty simple!

You must keep all the above mentioned information in mind when purchasing or replacing your faucet. Stay updated with our blog for more such interesting information related to faucets and sanitaryware!