How well do you know your toilet? Here’re parts of a toilet you should know about! 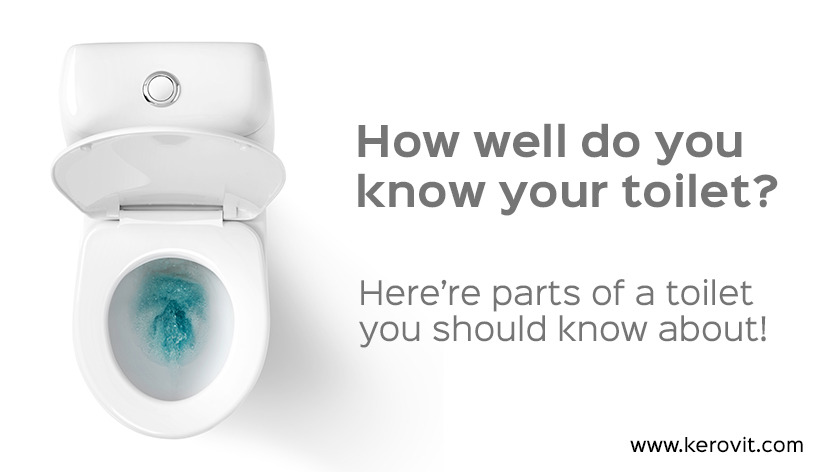 How well do you know your toilet? Here’re parts of a toilet you should know about!

A toilet is not only one of the most important components of the bathroom, but also one of the most amusing! This is because of how it elegantly fulfils its primary function of providing hygiene, while being so subtle about the brilliance behind its design and engineering. While it is true that there are different types of toilets and that there has been an evident evolution in several parts of the toilets, most toilets still have their basic parts common and intact, due to the proven functionality over the years.

Understanding about the various parts of a toilet is important, as it greatly helps in proper cleaning and maintenance of the toilet. Having knowledge of a toilet’s parts can also play a helpful role in fixing some common problems and even in the installation of a toilet.

Here are parts of a toilet that yous should know about:

A toilet bowl is essentially a big base on which the user is seated for using the toilet. All the waste goes into a hole, which may either be round shaped or oblong. Toilet bowls are made up of waterproof material known as vitreous china, which helps in resistance against staining. You will also find a C-shaped trap inside the bowl by which the waste gets carried away. Another function of this trap is to reserve a small amount of fresh water to act as a barrier that ensures suppression of the sewer stench and keeps your home smell free.

This can either be a gasket, a rubber that’s O-shaped or even a wax washer, which is found between the top of the toilet bowl and the bottom of the toilet’s tank. Also known as a Tank O-Ring Seal in some parts of the world, its primary function is to ensure that water doesn’t leak out of the toilet tank. If a toilet leaks above the bowl, but below the tank of the toilet, you can be certain that it’s most likely due to a damaged O-Ring seal or due to its improper installation. A simple way to tackle this is to empty out all the water from the tank and remove the tank, followed by fixing a brand new mack washer in place of the obsolete one.

In most standard toilets, a toilet tank is essentially the component of a toilet that safely stores the water that’s to be used for the purpose of flushing away the waste that’s in the toilet bowl. The toilet tank is fixed in the upper part, above the bowl of the toilet. Keep in mind that this is for standard toilets. As mentioned earlier, there are different types of toilets in this modern world and while a toilet tank is an integral part of the toilet, it is usually concealed behind the walls in case of wall hung toilets, to give your bathroom a classier look and feel. Made up of porcelain, these pieces are solid-state and are unlikely to malfunction, as there are no moving parts. A damaged toilet tank may show a crack or a break in the structure. This issue can be conveniently resolved by ensuring that the insides of the toilet tank are dried out and the crack in question is filled with silicone plumbing epoxy.

A gasket that’s round and shaped like a cone, and is fixed between that floor flange’s top part and the bottom of the toilet bowl, is known as the Wax Seal of the toilet. Meant for only one time use, the main function of wax seals is to ensure that there is no leakage of water from the toilet tank. If the size of the wax seal is inadequate for the space or in case you have a cracked wax seal, you are likely to find a leakage at the base of the toilet. A simple way to resolve this is to replace the damaged wax ring with a brand new one, which can be done after removing the toilet. You can also use a silicone ring to replace the existing wax ring. If you would like the seal to be tighter, we recommend going for extra-thick wax rings!

As a component that’s part of the toilet tank in standard toilets, a toilet handle is a lever that’s used to make the toilet flush. However, with the advent of modern sanitaryware, a toilet handle isn’t in the form of a lever anymore; it’s mostly seen as a button or buttons above the lid of the toilet. The two buttons for flushing are for dual flush toilets – one button for the disposal of solid waste and one for liquid waste. Regardless of whether your toilet handle is a lever or button(s), it is connected to a long arm, which goes all the way into the toilet tank. The end part of this long arm pulls the chain, which helps in releasing the flapper, followed by flushing of the toilet. You may be wondering what a chain or flapper is. Read on below!

Also known as the ‘lift chain’, the toilet chain is a short metal-linked chain which primarily connects the toilet handle to the flapper of the toilet. Once the toilet handle is activated, either by pulling of a toilet lever or pushing of a button (depending on the type of toilet you use), the chain is then pulled and it leads to the lifting of the flapper, which makes the flush happen.

– The gateway into the toilet bowl – Flapper

As the name suggests, a toilet float is a round ball made of either plastic or aluminium and does the job of water level management inside the toilet tank. This is due to the fact that toilet floats have enough buoyancy in them that they can stay afloat in the water of the toilet tank. If you find water constantly flowing even after the tank is full or if the tank doesn’t fill completely, it’s time for you to install a new toilet float.

We hope that now you know and understand your toilet better!